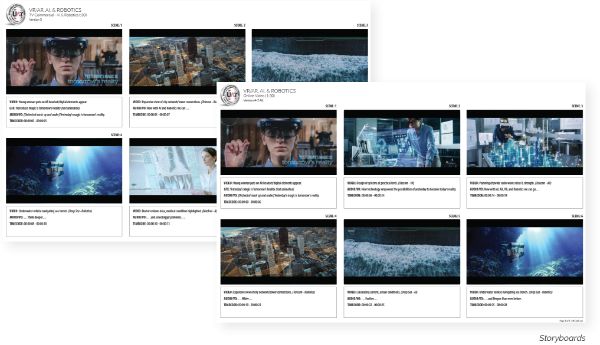 AR/VR leveraged in creation of videos

Applying advancing technology is now one of the keys to the strategic approach to marketing when the focus is improving the effectiveness of marketing communications. Some teams are purposely built and driven to create marketing experiences that are dynamic, visceral, and immersive across the customers’ multi-channel, multi-screen and variable environmental brand experience. Why? If marketing teams can’t leverage the tech better than the competitors, then how does your advertising connect better with your targets on the new and tech driven channels your targets choose to interact with? How do your marketers assure your brand ensures the customer experience? By driving preference and ultimately conversions.

It’s simply the most efficient way to best engage customers and prospects at every point along their journey from awareness to consideration, making a purchase, and finally, brand advocacy or loyalty. Effective marketing is always about pushing the envelope of the average. It’s the only way to ensure top marketing agencies continue to deliver extraordinary results. By crafting optimum customer experiences, marketers create brand preference and conversion, in addition to impactful marketing messaging that drives the leads, brand awareness, and preference.

When YouTube began to stream 360-degree, 4K video, integrated marketers recognized this particular progression of high-quality advertising video as the moment they had been waiting for. An opportunity to launch an initiative utilizing developing video tools and platforms to create and demonstrate a new leading edge for the marketing industry. FabCom had long dreamed of blending virtual reality (VR) with augmented reality (AR) with the ability to display it on any screen (without a headset). The continual expansion of Internet bandwidth, video play, and capture technology provided the opportunity to begin realizing that vision.

Over the next few years, the agency built out a 3,000 square foot image capture studio within our 10,000 square foot integrated marketing facility and invested more than $1.2 million in state-of-the-art imaging equipment and software. As industry innovators, we also began re-engineering our staffing to bring in more diversified and cross-disciplined professionals in the video technology, creation, coding, and editing arenas. FabCom set out to fulfill the original dream of seamlessly marrying conventional video, VR, and AR. Against the so-called better judgement of many in the field, and by pure definition of the academics, we were told it was impossible.

The Assembly of Video Tech and Talent

The agency recruited a veteran Hollywood film and television digital video technologist and a professor of video at a top technology university, to co-head up the new studio and help lead us further along the path of the future of cinematography level video, leveraged online for the sake of curating emotional connection and brand preference.

Today, a key software suite leveraged in our image capture studio for compositing is the distributive application, Nuke. It’s the new best standard for compositing within the visual effects industry in motion pictures and television. It’s a best of class, node-based digital compositing application designed for superior quality post-production. 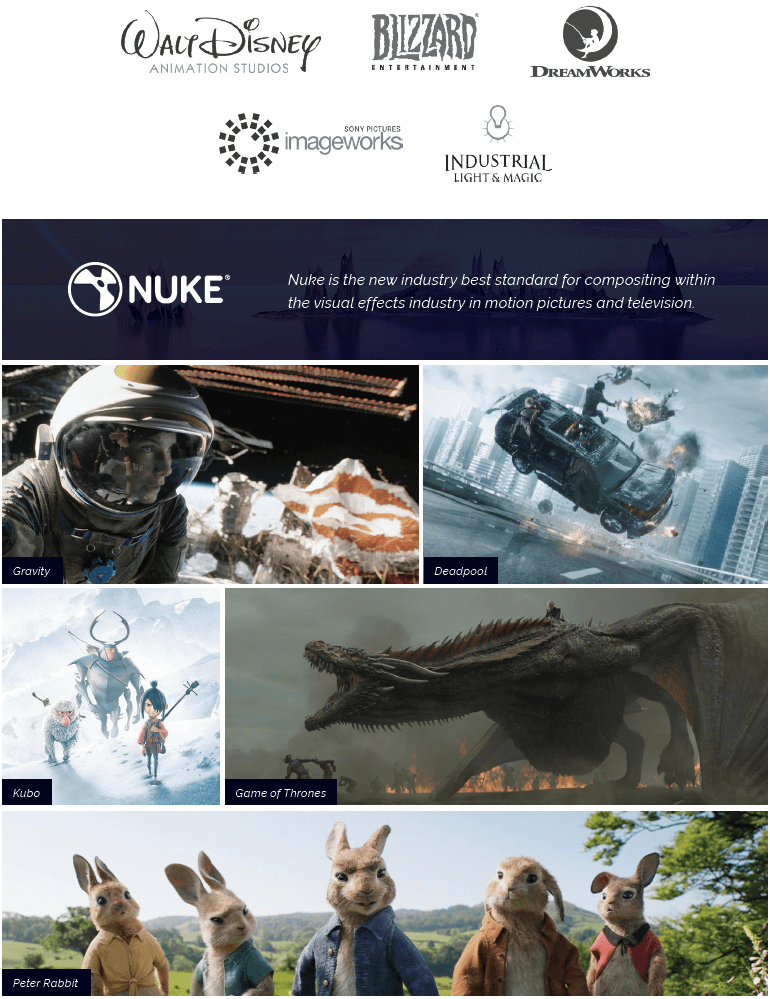 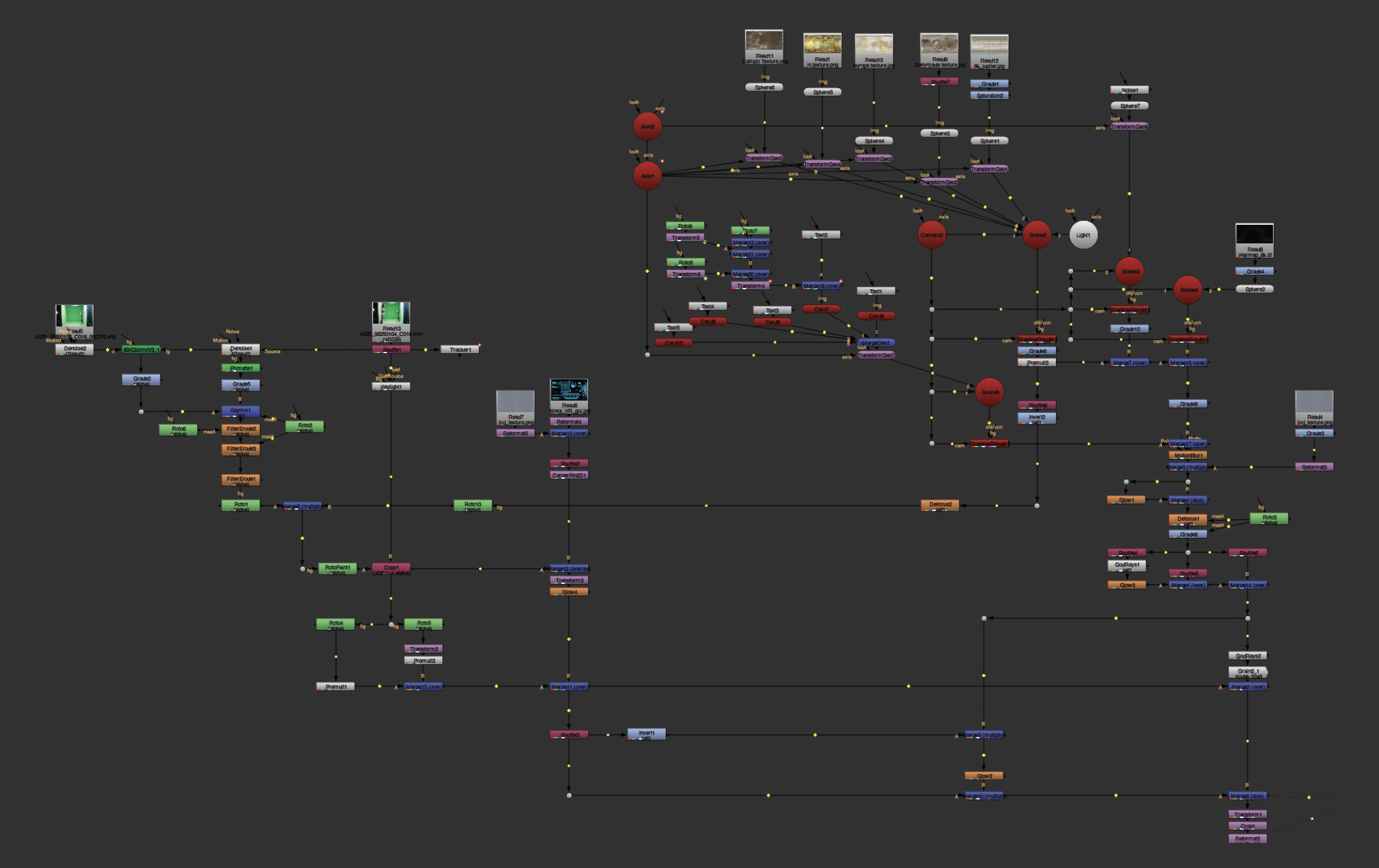 Node-based composite, consisting of python-based code, above, represents an entire multi-image, multi-level composite as a tree graph, linking media objects and effects in a sequential procedural “map.” This intuitively lays out the progression from source input to final output, giving a video editor much more flexibility and control of functional processes than a layer-based or typically used linear editing software.

Today’s digital video capabilities and platforms allow us to create realistic and powerful immersive experiences which have broad applications in many industries, such as advertising, entertainment, education, technology adoption, healthcare, and many more. We know from quantitative research that these immersive experiences can have a powerful differentiating effect on viewers, as well as, the attraction to engage with and be influenced by the content. Because the development of these immersive video experiences requires the effort of both top creative and technology “ninjas,” most agencies have to resort to using “hired guns” outside their shop to produce videos. With effective online video, we need talent that understands both connective storytelling and the SWOTs of the technology. At FabCom, our embedded video studio and team of experienced integrated marketing pros provides advertising clients a huge quality and efficiency advantage against competition.

A university asked us to create an amazing immersive video to assist in their recruitment of students to their degree programs. Because they are a technology university that teaches the programs that produce immersive video, they have an understanding of the nuances of great online video. They brought in FabCom because of the experience of our video department and their confidence in our video production and marketing ROI values.

The task at hand was to create a video to visualize the present and near future of Artificial Intelligence (AI), Augmented Reality (AR), Virtual Reality (VR), and Robotics. The client shared some spots they really liked, which were futuristic, but not “science fiction.” In essence, we worked on creating visualizations of where AI, AR, VR, and Robotics are going — the degree programs the university wanted FabCom to emphasize in a significant multi-channel, multi-screen, multi-stage recruitment campaign.

Before we dive into the video production and technical details of creating the spot, here’s a quick, simple chart to help sort out the various rapidly evolving forms of digital videography: 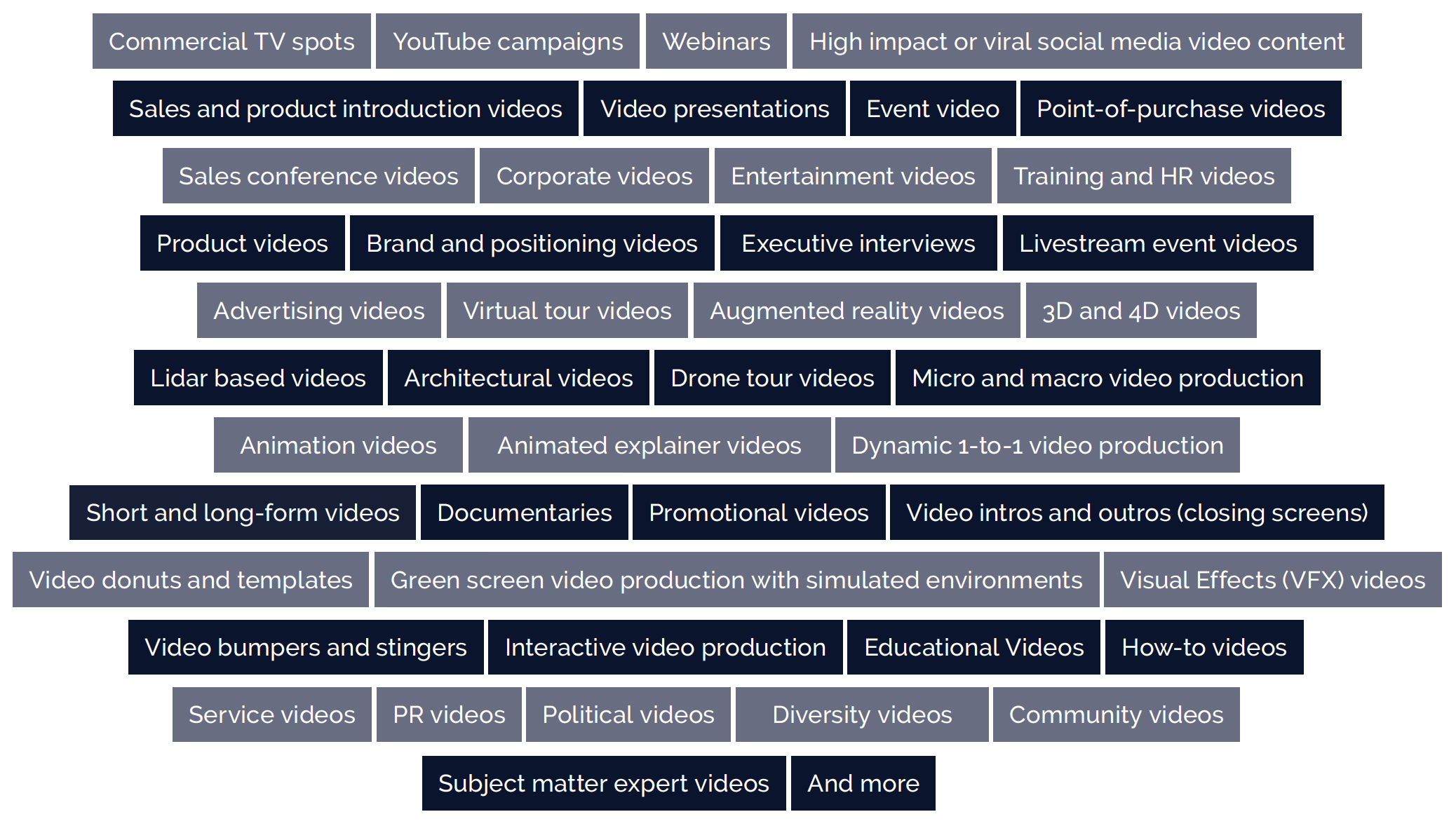 Our process began with an extensive brainstorming session involving designers, strategists, and of course, our team of in-house technologists and video pros. We considered a variety of scenarios in which AI, AR, VR, and Robotics could interact together, to deliver the full experience of these technologies in technology driven industries such as telecommunications, undersea exploration, space exploration, disaster recovery, military, energy production, and healthcare.

The creative teams then envisioned four different, interlocking vignettes for each industry, so we’d see someone using AI to figure something out, using AR to see the data required, overlay it on real reality to see them using VR, and we’d see robotics being leveraged in some capacity to create the action. For instance, in space exploration, AI can be used for plotting courses through the solar system, AR is used to provide “heads-up” information to an astronaut’s face shield, VR allows scientists to view a planet as though they are standing on it rather than just watching it on a screen, and robotics are used to actually explore a planet’s surface and oceans. 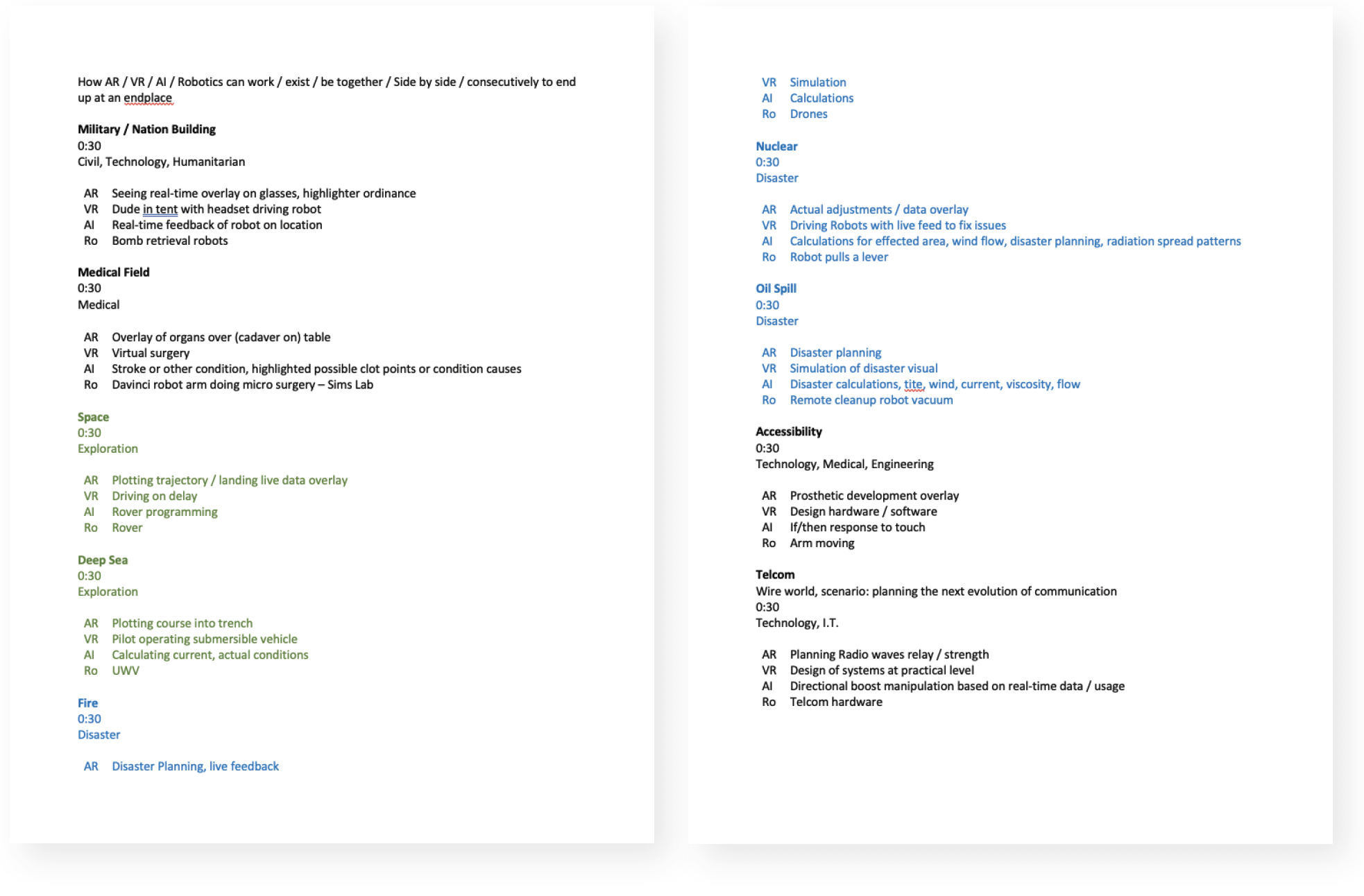 While scripts were being completed, concept scenarios were refined by the creative teams to add depth to the story structure during the storyboard process. This aided in including the growing number of industry sectors benefitting from the outcomes of applying AI, AR, VR, and Robotics to their respective fields.

The Best Video Production is About the Ingredients and the Talent

To balance the technical subject matter of the production, several music options were carefully considered to set the appropriate emotional tone for the video’s target audiences. A slow-tempo, progressive audio track was selected to perfectly drive imagery for the demographics of prospective college students, as well as, their parent or guardian decision-makers.

In the editing phase, music and video elements flowed together through pacing of content supported by alternating female and male voice-overs. A new “stinger” animation of the university’s logo was also created to close the video with impactful motion graphics that provide a call-to-action for those motivated to pursue a higher education in these emerging areas of technology. 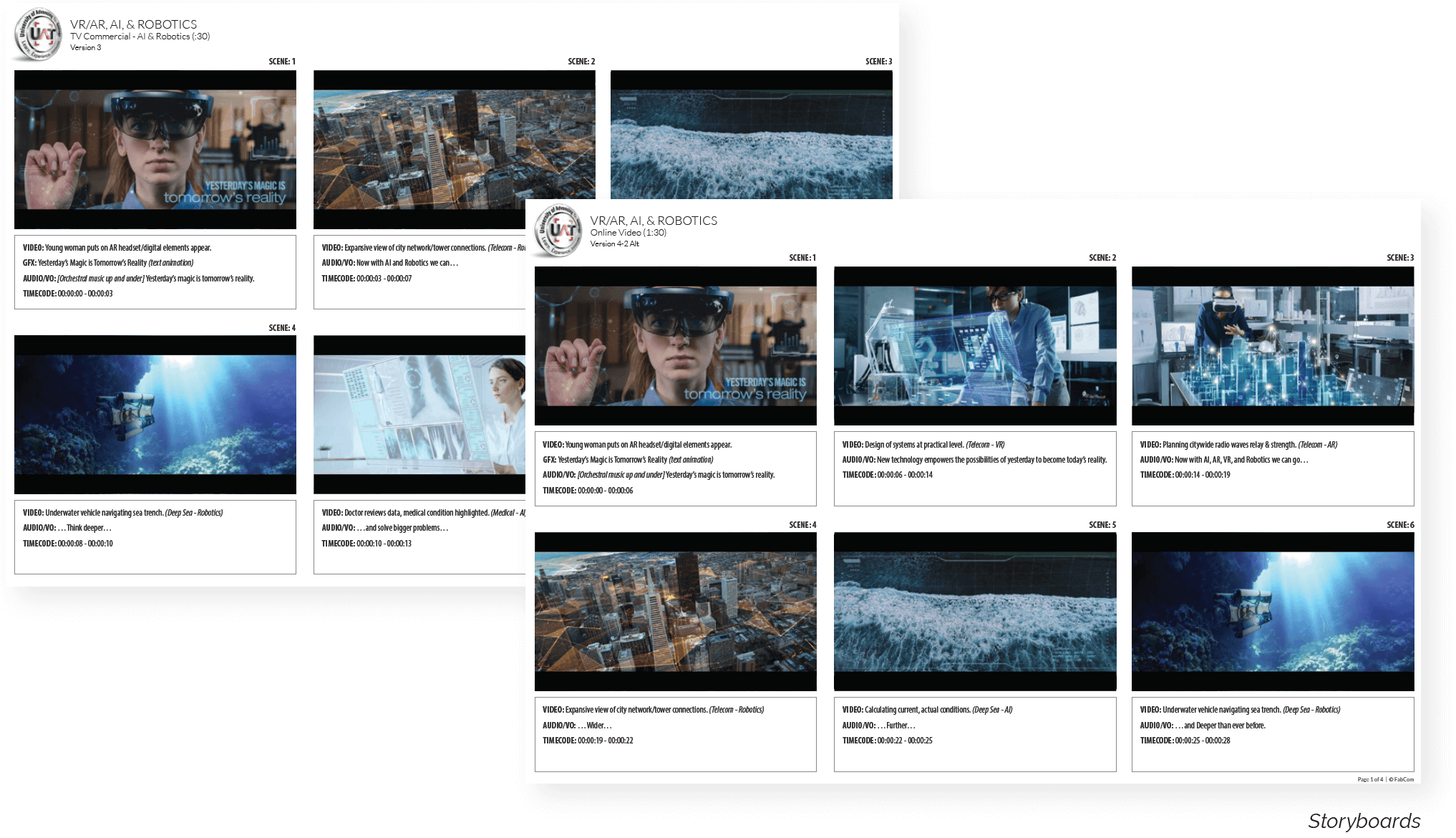 The integrated production team shot some of the material and also, due to the client’s budget, purchased additional high-quality stock footage. Our senior video technologists led the charge on putting the video together, knowing that our intent was always to really embellish the stock footage with visual effects and motion graphics.

“Visual Effects” means fantastic imagery creation that happens in post-production. “Special Effects” are real-action scenes that actually take place on set and are recorded on the camera. So, an exploding car via special effects is a real car actually exploding, and in the visual effects realm, the explosion would be computer-generated in post-production. Same thing — two ways to get there. 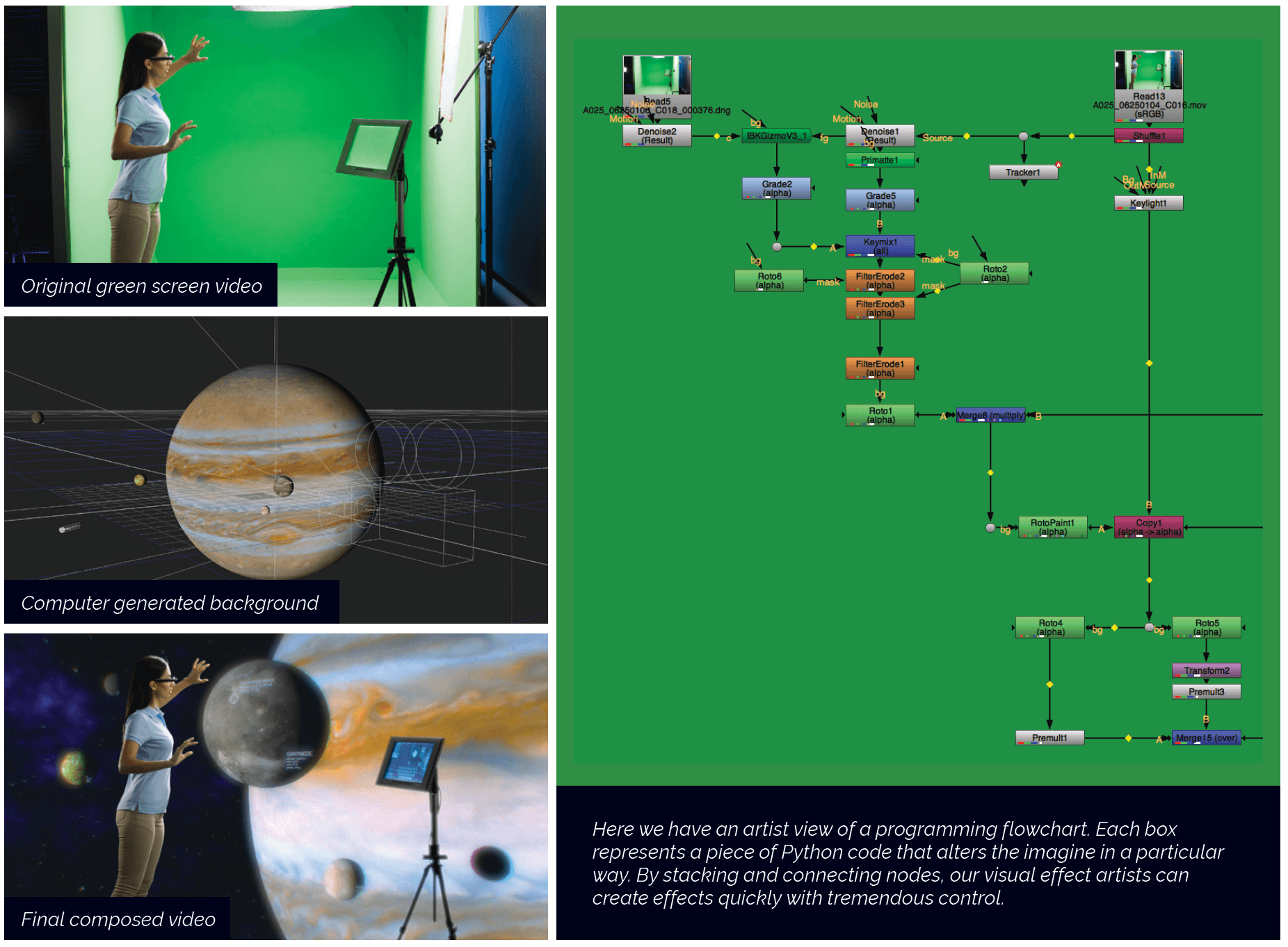 The content we shot in-house was accomplished through the use of our green screen studio. Take for example, the floating planetary sequence. We researched and provisioned the high-quality stock footage of the planetary body Jupiter and then set to work on augmenting it. Next, we shot a local actor in our green screen studio interacting with and expanding the planet, as if they were standing near it, for a closer look. 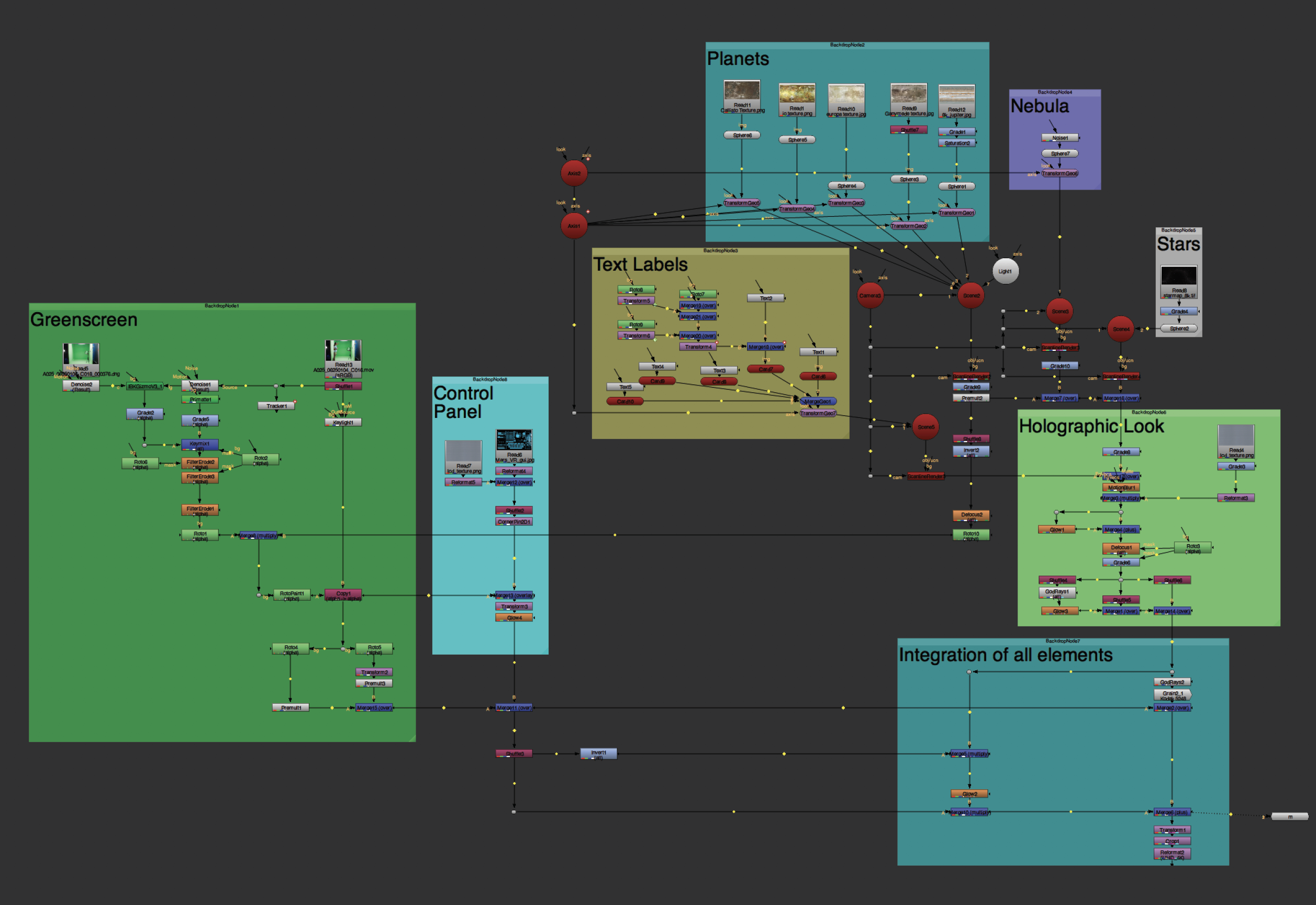 The agency’s talented video production team looked at everything about the stock footage — lighting, color, composition, perspective, the lens used, and background, so our in-house cinematographer/editor could design the green screen shot so that the actor sequence we filmed matched precisely with the desired outcome.

The next task was to take the actor off the green screen and integrate her into the other stock footage of Jupiter and its surrounding moons. That’s “compositing” — taking two or more layers of imagery and making a single, composite image. This is very similar to what designers do with a single image in Photoshop, which is called “photo-compositing.” In video, that single frame appears 24 times a second, so the tools have to be different and behave very differently. Hardware and software do the compositing in motion over time in order to change and animate the video accurately. In instances where the camera is moving, it’s tracked precisely so all the pieces stick together and appear as they’re shot from the same moving camera.

The advertising video gained over 1 million views on YouTube in the first week and ran at the lowest cost per lead in company history. This campaign was only recently launched but has already produced 19% higher conversion rates than all other media ran to date. Conversion rates are lagging indicators in education, so check back next year and we will report definitive conversion rate success for the campaign.

FabCom is now deep into our next breakthrough in video which is even more extraordinary. Check back for more marketing white papers and advertising case studies as we post them.