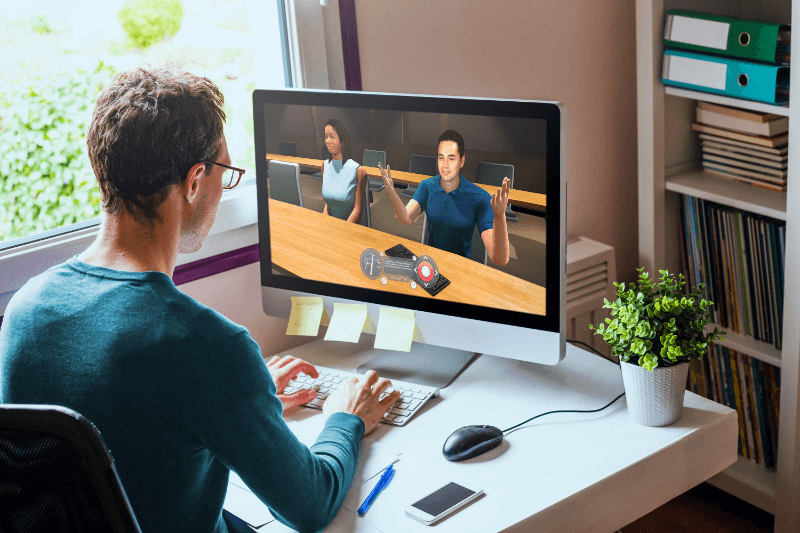 Whether it be Jobs and Wozniak working out of a garage and out-innovating IBM or Zuckerberg working from his dorm room and wiping out MySpace, real innovation usually isn’t created first by the big companies. As a small company with a vision and history of innovation, FabCom is so excited to join these legends in beating the big guys with a superior approach and execution that separates the pack of emerging players in this arena.

Recently, Mark Zuckerberg discussed the metaverse, an immersive, next generation vision for the Internet. The concept of a metaverse is exciting and sometimes far reaching, think Ready Player One or Snow Crash.

Then, on Friday, August 19, 2021, Zuckerberg debuted Horizon Workrooms, a VR app for teamwork in virtual office spaces, as the first version of a professional application for the metaverse. A year earlier on June 23, 2020, FabCom launched the BETA version of HReality, a business centric hybrid VR platform.

While this next phase of the Internet is going to light up every inner child, the business application that Zuckerberg debuted left us feeling like we’re in a game, not conducting meaningful business. In an interview with The Verge, Zuckerberg details a future of less encumbering headgear and more realistic avatars, but the future is here today with HReality.

FabCom has worked for years with converging technology in AR/VR, AI, visual effects, human-computer interaction, and emotionally connective corporate video and has a product that is dimensionally further than what was debuted by Facebook. We fundamentally believe that people don't want to interact in business situations with headgear or with the silliness of wizards, warlocks, and the body postures of the gaming generation. That’s why HReality takes a professional approach to gamification with professionalication™.

At this point in the technology’s development curve, we think deploying gamification for business interactions in 2021 is like all of industry, governments, and investors advocating for steam engines to be applied to the new automobile at the turn of the twentieth century. When automobiles were first introduced, industry was controlled by the railroad infrastructure and their need to forward leverage their investments and technology from the old into the new.

The industrial infrastructure giants of the day controlled all opinions. Similar to the digital infrastructure giants of today controlling all common opinions of what should be next. As the ones creating steam engines to modernize the horse and buggy and the controlling opinion of the establishment, their objective was to advocate against gas engines. They advocated against all alternative methods and worked to mitigate them. They used their money and position to make sure the general public, opinion makers, and early investors were afraid of the little guys, Ford and Mercedes Benz, who were advocating for gasoline engines. Professionalication is the gas engine for the metaverse and gamification is the steam engine.

This story repeats itself over and over again for alternative innovations by alternative thinkers and creators. Think Musk versus GM. Why? The investments into billions of dollars of infrastructure. Facebook must leverage Oculus forward even though Zuckerberg has admitted his steam engine is a little too heavy for the automobile.

We're talking about the next evolution to the gas engine with professionalication. Similar to the railroad establishment advocating for steam engines as the future of travel because that was the infrastructure, Horizon Workrooms is advocating for cumbersome headsets and gamey characters. Like Ford and Mercedes Benz with the gas engine, FabCom, an integrated marketing and brand experience agency in Scottsdale, AZ is introducing HReality as a revolutionary difference to Facebook's current infrastructure.

The idea that business wants and needs professionalication over gamification is a fundamental difference in this firm's approach to HReality and the purposing of this technology.

Instead of looking like cartoons or gaming characters, HReality avatars are true to your likeness and incorporate realistic body language, body movements, and the nuanced professional decorum of one-to-one interactions within industry, business, and education.

Additionally, HReality enables you to fully interact in the environment without the use of headgear and handheld devices via the computer equipment you already own. With Horizon Workrooms, you need an Oculus VR headset to collaborate with others inside the environment. Can you imagine buying thousands of dollars worth of head and hand gear for everyone in the company? Or the hassle this creates for IT? Or the adoption curve with older employees? Of course the big guys know this, so they’ve incorporated Zoom-type functionality into the platform for users to be displayed as a video call inside the room instead of an avatar. 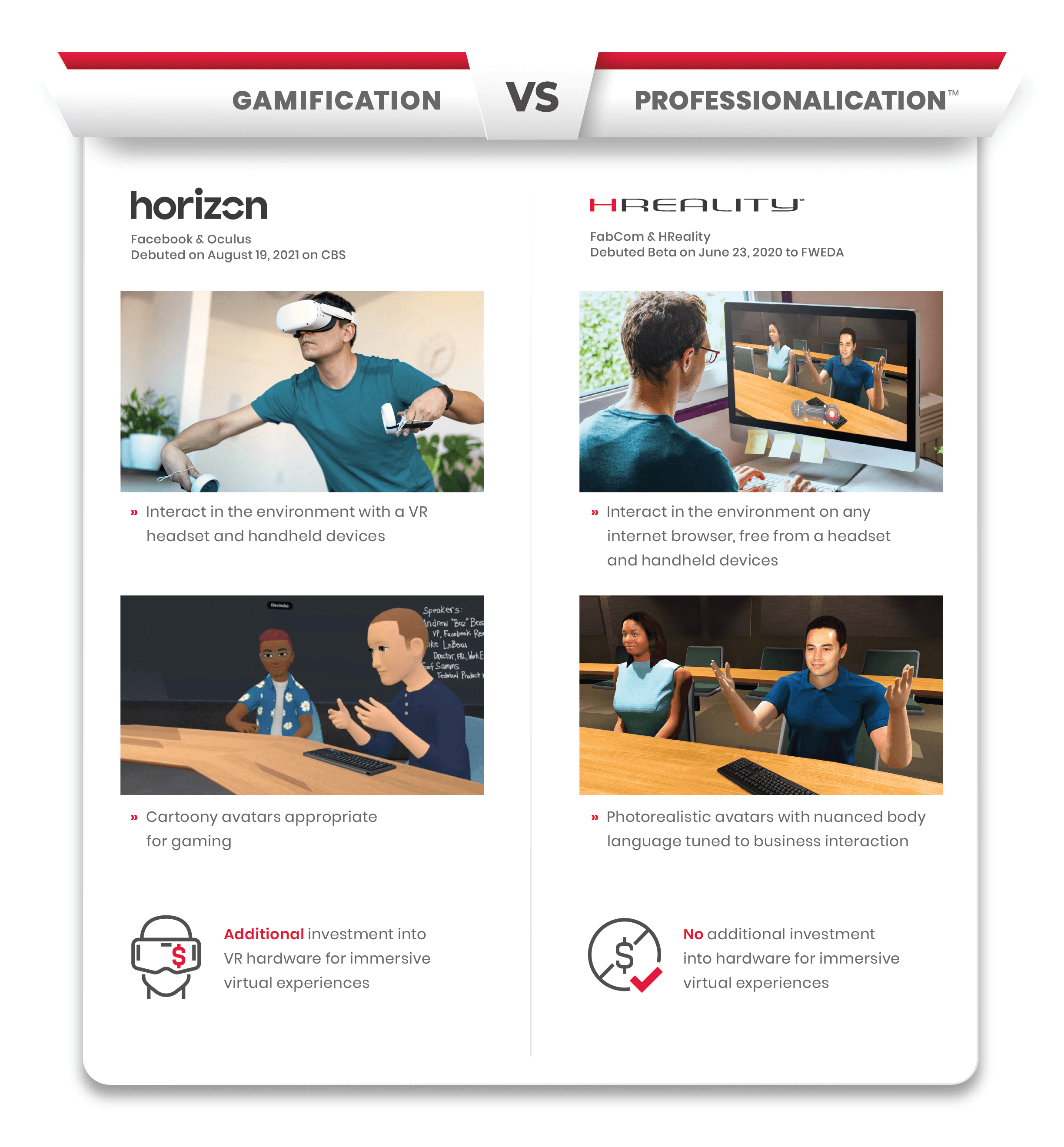 Designed with interaction in mind, HReality is currently in beta development for use in multiple industries. Debuting in 2022 as freeware, HReality Events aims to revolutionize the conference and trade show industry. With only a small deposit to provision an event, HReality Events can be planned by a single person and returns 70% of proceeds to the host.

As alternative innovators and creators, we’re so excited to see where HReality can be taken with the metaverse. Learn more about HReality and becoming a BETA partner here.